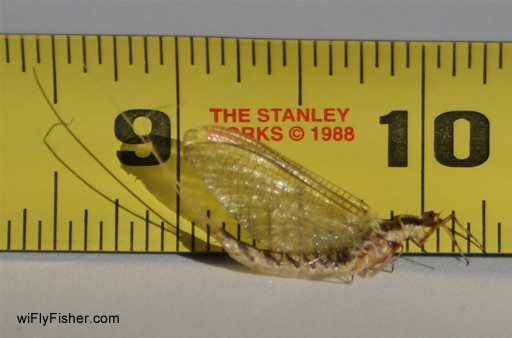 Hexagenia limbata, the second largest North American mayfly species and is one of Wisconsin's super hatches. The Hex hatch brings together fly fishermen from all over to fish for trout in the twilight hours. These very large, clumsy mayflies can even get the largest trout to start gulping and slurping duns and spinners on the surface. The Hex hatch becomes so dense on some trout streams and Wisconsin rivers that it has been known to make the nearby roads and bridges slick. The sound of their beating wings as these large bugs fly overhead and the loud slurping and splashing sounds of trout frantically feeding in the twilight hours is something you will never forget.

The nymphs of Hexagenia limbata live in the muck, sand, and silty bottoms of pools and backwaters of many Wisconsin streams and lakes. At dusk, in late June to mid-July, the nymphs begin to come out of their burrows in the mucky bottoms and wiggle and swim toward the surface. These partially emerging duns are extremely vulnerable to eagerly waiting for trout, smallmouth bass, or other fish. At this time, a wiggle nymph or a large emerger pattern can be very effective. Once they shuck their nymphal case the large yellowish Hex duns pop to the surface and try to become airborne quickly before being devoured. This is when you will begin to hear the loud slurping and splashing noises from frantically feeding trout. My large, Hex extended body comparadun dry fly pattern on a heavy tippet may help you catch the trout of a lifetime during the twilight Hex hatch. (Note: Hexagenia limbata duns and spinners do vary somewhat in overall size and coloration. See the photo below as an example.)

After a couple of days of hatching the Hexagenia limbata spinners will join the emerging duns in the twilight hours of darkness. At this time a good pen light is needed to help you switch from a Hex dun or emerger fly pattern to a large Hex spinner pattern. All in all, if you hit this hatch right you can enjoy fishing for large trout from dusk until around midnight when the last spinners drop to the water. 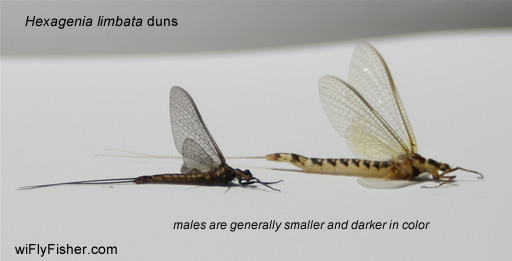 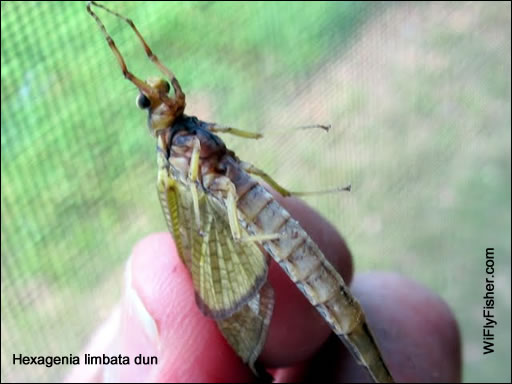 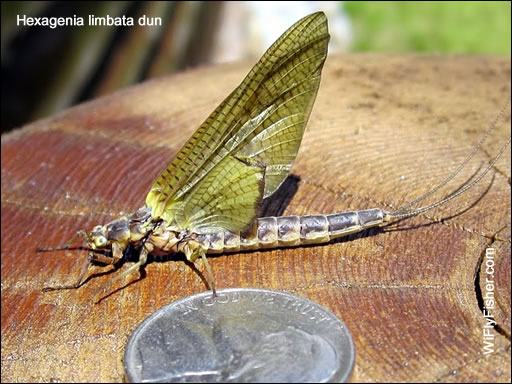 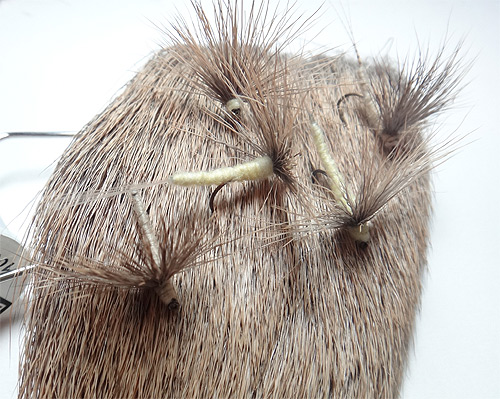 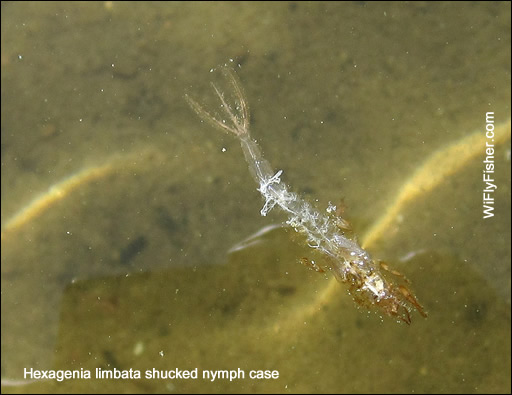 Look for empty Hex nymph cases in the backwaters. It is a sure sign that the Hex hatch occurred the night before.